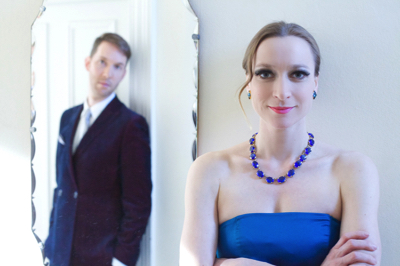 Sarah-Louise Young and Michael Roulston have been writing and performing partners since 2005, starting life in cabaret and more recently crossing over into musical theatre.

They have performed internationally, including Canada, Malaysia and at the prestigious Adelaide Cabaret Festival and last year made their Off-Broadway debut together with their West End hit show about Julie Andrews, 'Julie Madly Deeply'.

Veterans of the Edinburgh Fringe, their critically acclaimed Cabaret Wh*re shows enjoyed sold out runs before transferring to the Soho Theatre and both of their 2016 triumphs, 'Je Regrette!' and 'Songs For Lovers (And Other Idiots)' played to packed crowds at Crazy Coqs before embarking on UK and international tours.

They have won numerous awards including Best Musical Variety Act in the London Cabaret Awards and Time Out's Top Ten Cabaret Acts Of The Year and are regulars on London’s vibrant cabaret scene, appearing at Café de Paris, The Hippodrome, The Elgar Room and as part of 'The Black Cat: Salon Des Artistes' in their Saturday night residency at Zedel.

As musical theatre writers, they were selected by BEAM to present their new full-length piece, 'Maxa, The Most Assassinated Woman In The World', which was then shortlisted for the Stiles & Drew Mentorship Prize. They were also invited to showcase an extract at Adam Lenson’s Signal series at the Hospital Club and workshopped for a week at Wilton’s Music Hall.

You can visit the site for this show here.

★★★★ ‘Their lyrics are sparkling, clever and deliciously witty’ THE SCOTSMAN

As well as writing for themselves, they have been commissioned by The Terror Season at the Soho Theatre and Southwark Playhouse and written with several acts, including Marcel Lucont, Lili La Scala, Ophelia Bitz, Clementine Living Fashion Doll and TO&ST winner, Lynn Ruth Miller.

They have both written and performed with Emmy nominated Fascinating Aïda. Sarah-Louise guested on their 'Cheap Flights' Tour and Michael recently joined the team, having previously accompanied Dillie Keane on her solo tour.

a force to be reckoned with’ THREE WEEKS

Michael also works regularly with Jess Robinson, Meow Meow, Christine Bovill and Dusty Limits, appearing at the Royal Festival Hall and BBC Radio 4’s The Now Show. Sarah-Louise Young has numerous acting and directing credits and created the ‘cult hit’ cabaret An Evening Without Kate Bush with Russell Lucas, set to tour the UK in 2021. She also has written a new solo show, The Silent Treatment, for Summerhall, Edinburgh 2021.